St Anthony’s Trust was created by the late Christopher Mann in August 1972 in order to provide for the retirement of teachers at Michael Hall Steiner Waldorf School in Forest Row. This project did not in the end come to fruition but the Trust then decided to widen its remit and from 1975 it also took on support for the training of biodynamic farmers. Christopher Mann’s continuing great interest was instrumental to the work of the Trust in many ways, particularly in financial terms, in securing the future of our two local biodynamic farms.

In 1979 St Anthony’s Trust launched a public appeal for funds to buy Plaw Hatch Farm. This appeal was successful, and Plaw Hatch became an embryonic biodynamic agricultural community farm with 93 local community members. Informed by the teachings of Dr Manfred Klett, then the director of the Department of Agriculture at the Goetheanum in Switzerland and formerly one of the farmers at Dottenfelderhof in Germany, the new farmer, Andrew Carnegie, set about developing the ‘agricultural community’ around the farm. He envisaged this community as a support group addressing:

Although it was never formalised, Carnegie did create such a community, comprising farm staff and community members, which supported him until he left the farm to concentrate on advising other farmers. The farm was, however, under-capitalised and despite the subsequent creation of the farm shop, which would become so important in the future, by 2000 the farm was in financial difficulties. A very generous private donation was secured, which stopped the farm from going into liquidation. The business then came into community management and was transferred to the recently created Tablehurst and Plaw Hatch Co-op in 2001. 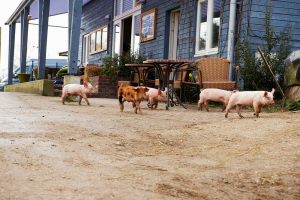 In 1994, Emerson College, which owned Tablehurst Farm, could no longer support the farm and was considering selling it. A group of local people formed a community group around farmers Peter and Brigitte Brown and, following a major community fundraising drive, managed to buy the farm assets and acquire a tenancy of the land. Later on, and following prolonged negotiations, the trustees of Emerson College donated a significant part of the Tablehurst estate to St Anthony’s Trust in 2005, so that the Trust could ensure that the land was retained for biodynamic agriculture and the training of biodynamic farmers. Since that time the Trust has funded the construction of a new barn and, with a partial Government grant, the development of an enlarged shop, abattoir and butchery facility. It has also worked with the Tablehurst farmers to fundraise for the conversion of an old vegetable store to a new farm house and apprentice accommodation.

By 2010 it was clear that continuing financial difficulties at Emerson College were threatening the future of the biodynamic agriculture training housed there, as well as Tablehurst Farm’s occupation of the remaining Emerson land. Following a community fund raising initiative, St Anthony’s Trust in 2011 took possession of a further 5 hectares of the Tablehurst estate, as well as the teaching building used for the biodynamic training (the Rachel Carson Centre at Emerson College), while the Biodynamic Association has relaunched the biodynamic training with a stronger input from Tablehurst Farm, which now provides practical training in a range of subjects.